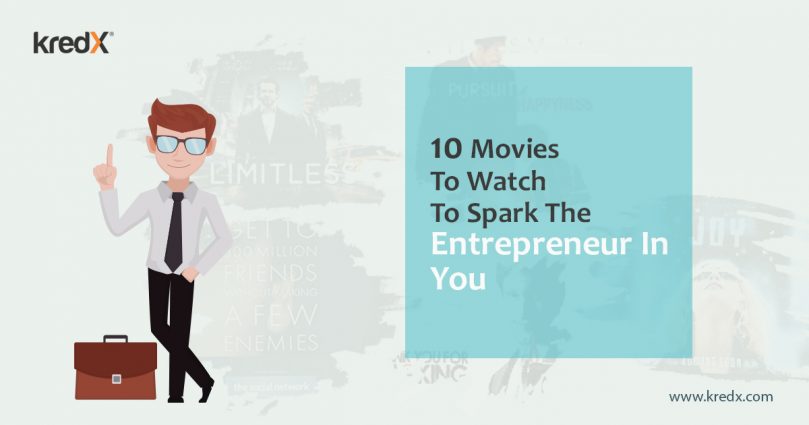 Infographic: 10 Movies To Watch To Spark The Entrepreneur In You

Movies are undeniably powerful. They can take you from feeling ‘down in the dumps’ to ‘I can achieve it all’, from ‘I’m the boss of the world’ to questioning your very existence all in a couple of hours. So, what do you do when you’re feeling absolutely blue and uninspired? Watch a movie of course! Listed below are some of our favourite inspirational movies (in no particular order) that double up as an instant ‘pick me up’ pill when you’re feeling low on energy. You can thank us later!

One word. Facebook. Who doesn’t know the story of how Facebook came into being and the ginger-haired man behind this product that completely revamped the idea of the internet? The movie tells the story of how Mark Zuckerberg transformed from being a geeky Harvard student to the one of the most successful entrepreneurs and founder of the most popular social media network in the world. The Social Network is a testament to the fact that entrepreneurs can change the world sometimes.

The Pursuit of Happyness, 2006

No list is complete without The Pursuit of Happyness. Based on the true story of Chris Gardner’s path to success, this movie is full of adventure, love, pain and most importantly, hope. It’ll teach you to chase your dreams with relentless passion and dedication no matter what the odds are till you achieve it.

One of our in-house favourites, this satirical comedy portrays everything that’s wrong (and right) about the corporate world and the big industry players. Thank You for Smoking follows the life of a cigarette company spokesperson as he defends the tobacco industry while being a role model for his 12-year-old son. A hilarious watch for anyone looking for tips on marketing, advertising and sales!

This movie with its strong cast list and a female lead is a refreshing change from entrepreneurial movies that usually have male protagonists. In a nutshell, Joy, which is the name of the character Jennifer Lawrence plays, tells the story of a creative young woman who lives with her dysfunctional family and invents a self-wringing mop that catapults her to success. She goes on to become the matriarch of a powerful family business dynasty she builds brick by brick.

Anytime you are tempted to give up on your entrepreneurial dreams and return to a 9-5 life, watch the Office Space to remind yourself why you gave up your regular job in the first place. This comedy movie depicts the typical corporate culture, complete with office politics, work relationships, horrible bosses, et al.

This is yet another classic movie that we’re sure many of you would’ve already watched. Jerry Maguire follows the true story of a sports agent who decides to put to test a new philosophy, thereby, losing all that he had earned, money, fame, clients and a fiancee. He then goes on to reclaim what he has lost by simply following his dreams. Though this is more of a romantic comedy, a little romance never hurt anyone!

This is THE movie to watch for a power trip (and not in a negative way). And with a cast like Marlon Brando and Al Pacino, it just makes it even better. The Godfather movies, Parts I, IIand III, highlights the importance of networking and building relationships, making it a must-watch for entrepreneurs at various stages of their businesses.

Yet another in-house favourite, Limitless shows the events that follow after a struggling writer gets a mysterious pill which unlocks 100% of his brain’s capacity. Why is this on our list? Not because we’re fans of mysterious pills, but because the possibility of functioning at a much more higher and efficient rate than humans are currently capable of is awe-inspiring, to say the least! Imagine what you could achieve if this were to become a reality and we aspire to be the best possible versions of ourselves!

The Intern is not your typical, run-of-the-mill entrepreneurship movie, but a heart-warming beautiful story about a 70-year-old retired widower who becomes a senior intern at an online fashion website, run by a capable young woman and their beautiful friendship. Not only is it a feel-good movie, but it also reminds you of an important message; It’s never too late to learn!

Based on the true story of Jordan Belfort, The Wolf of Wall Street, this movie follows Belfort’s life from a successful money-minting stockbroker to his fall due to his criminal ways. The movie has some amazing speeches and dialogues that will get the inner entrepreneur in you fired up and ready to live the high life and deal with some serious cash while being cautious to not go overboard!

We’ve also compiled this list into a fun infographic!

While these are just some of the amazing movies you can watch, there are several more that are noteworthy such as Good Will Hunting, Dead Poets Society, Eat Pray Love, The Truman Show, Rush, Julie & Julia, The Aviator, Rocky and Lord of War to name a few.

Save this list so that the next time, you’re feeling blue, you know exactly what to do. A movie marathon of course!