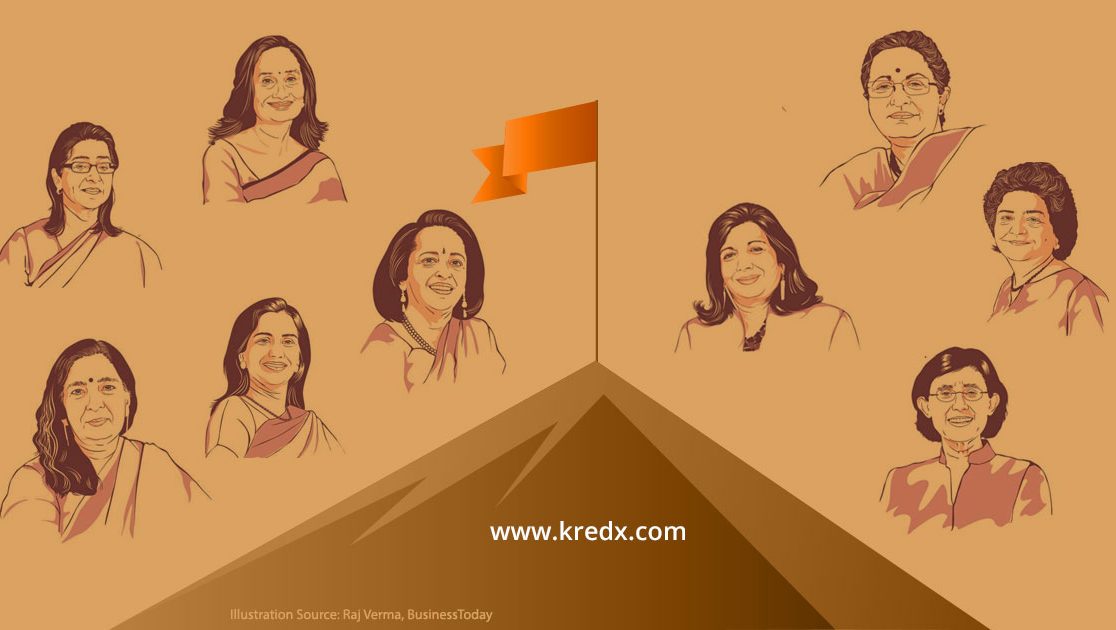 This Women’s Day, KredX brings to you some of the most inspiring women leaders in India who’ve made their mark and carved a place for themselves in the business world. Most of us know the Indra Nooyi’s, the Chanda Kochhar’s and Kiran Mazumdar Shaw’s, but how many of us know these illustrious women mentioned below? This is by no means an exhaustive list, but we here introduce you to a handful of amazing women leaders among the scores of women who make a difference in our lives every day.

A chartered accountant by profession, Chitra Ramkrishna was picked out by SS Nadkarni, then chairman of IDBI Bank, along with four others to set up NSE from scratch. Her illustrious career is an example of her intelligence and leadership skills. She became the third woman in the Asia-Pacific region to head an Exchange and is considered to be one of the most powerful women business leaders in the world with multiple accolades and awards to her credit. Under her leadership, the NSE grew its workforce to include women and made hiring a gender neutral and merit-based process.

Since joining State Bank of India as a probationary officer in 1977, Bhattacharya has risen in ranks to become the first woman chairperson of SBI. Listed as the 25th most powerful woman in the world, she not only reworked the business strategy of the bank but also introduced women-friendly policies such as a two-year sabbatical policy for women employees for child or elder care and free vaccination against cervical cancer for all SBI women employees.

Between balancing her family and a prolific career, Suyash took on the gargantuan task of improving the rating agency’s revenue with an innovation-led strategy after quitting her post as the Chief Executive Officer of L&T Investment Management Ltd. Unlike her predecessors, she was an outsider to the world of credit ratings, but quashed all naysayers when CRISIL’s revenues spoke for itself.

Remember the ban on Maggi noodles? Well, you have Ms. Shroff to thank for getting the ban lifted! She is the lead litigation partner and one of the lead partners in the competition law practice at Shardul Amarchand Mangaldas. Shroff joined law at a time when only a handful of women practiced it. Women accounted for 49 percent of her 800 employees in 2013, which is a testament to her preference for female candidates who are as qualified as their male counterparts. She also introduced flexible work hours and a creche for the convenience of her women employees.

Since joining Hindustan Unilever in 1995 as a management trainee, Priya Nair has climbed the corporate ladder to become the Executive Director (Home Care Division). She has been credited with increasing the market share of HUL’s laundry products and making the brand a mainstay in every household across India.

Fondly called Ms. Fixit, Aarthi Subramanian was appointed as an Executive Director in March 2015 and also became the first woman employee to make it to TCS’s board of directors. She has spearheaded the first citizen-centric program in India, the Passport Seva Project, that digitised the process of issuing passports in the country.

Though not a business leader, Rita Teaotia has helped the business industry through her work. A Gujarat-cadre IAS officer, Teaotia became the Commerce Secretary on July 1, 2015, and hasn’t looked back since. She was responsible for implementing important reforms aimed at India’s external trade sector and has been instrumental in helping Commerce Minister Nirmala Sitharaman to strengthen the nation’s trade prospects.

While women have emerged successful and have shown their worth in all walks of life, there is still a long way to go. We hope that these strong, powerful leaders inspire you and every woman in your life to bring out the inner superhero in you. From all of us at KredX, here’s wishing all the wonderful women reading this a Happy Women’s Day today and every day!